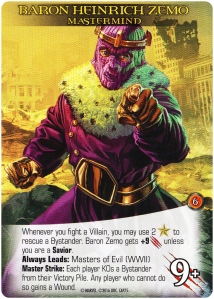 Baron Heinrich became one of the top scientists during the Nazi reign and was in high demand. Agent Nick Fury invaded Zemo’s castle where he came to destroy Zemo’s death ray. He was defeated and took his wife and son into hiding and wore a disguise because of his disgrace. Zemo was once working on a substance called Adhesive X when Captain America invaded and destroyed the only batch available. The adhesive covered his head where his disguise was stuck permanently. As a result, Zemo has formed a deep hatred for Captain America and humankind in general.