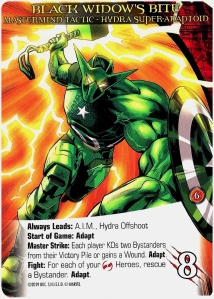 The HYDRA Super-Adaptoid and the HYDRA High Council constantly adapt their tactics to attack the Heroes in new ways. Accordingly, each of these Masterminds is a new “Adapting Mastermind” with 4 different Master Strikes. Here’s how they work.